What's my next step?

I just recently found out that one of my parents has SCA. What is my next step should be?

I first tried to make an appointment with a genetic counselor who specializes in neurogenetic disorder but she is not available for a while. In the meantime, I was able to make an appointment with a neurologist who specializes in SCA. I am hoping I can learn about the disease, most updated research, hopes for future treatments and wondering also that he might have a genetic counselor that he can refer me to.

Is there any down side of going to see a neurologist prior to seeing a genetic counselor? Will a “family history of SCA” as a reason for office visit (since I don’t have symptoms nor diagnosis) cause any kind of problem with me later – for example with health insurance or anything else I can’t think of, which I was hoping to learn from the genetic counselor prior to doctor’s office visit?

Do you have others in your family that have/had ataxia? That would point to a genetic origin. Just one person doesn’t necessarily indicate hereditary. There is a lot you can learn online. I would find out from my parent if possible if they had a DNA test done. Or was their dx indicating a different origin. I don’t think rushing to a genetic counselor or neurologist would be cost-effective, unless you have money to burn (sorry for my bluntness), because there is nothing the neurologist or genetic counselor could do for you as far as a cure. I would say taking a “wait and see” approach while reading information on the web would be the first approach. You can learn a lot doing your own investigation. Of course I live in the USA! USA! where health care can easily bankrupt you.

Please forgive my inappropriate comment at the end. I’m sorry that you are now experiencing SCA in your family. There are scientists looking for effective treatments and a cure. I looked for a way to edit it out, but couldn’t find one.

What you wrote was true, Oreberry. Unfortunately, it’s true.

If you don’t have any symptoms I would just go online and learn as much as you can but I wouldn’t do anything more. I was concerned about others in my family and my neurologist told me that for my brother and my son as long as they didn’t have symptoms they didn’t need to worry about it. I wouldn’t just jump into genetic testing (unless like Oreberry said “you have money to burn”)

You will learn that SCA’s can be idiopathic or hereditary, give you whatever symptoms it wants to within the type and progresses at whatever rate it wants to and there is no cure. You may be able to treat the symptoms.

If you are in the USA don’t bother going to the neurologist or anyone else unless you are having symptoms. If you are going to just learn about it you will pay for the visit out of your pocket. The insurance companies won’t consider it medically necessary and won’t pay.

I agree withthe others that there isn’t anything that a neurologist can do for you unless you have symptoms or you want to be tested so you can plan better for the future. The other thing you can do, which you should be doing anyway is to savemoney and check that you are good on disability insurance. My advice would be different (not about money stuff–because one never knows what will happen) if you were planning on having a child. In that case you may want to be more aware of risks. I would say that to a male or female.

To correct/delete after posting, usually there’s a ‘pen’ symbol at the bottom right hand corner of your specific post. Click on that and you can 'edit’

Thanks Beryl, except I have no idea what you just said. I think all this tech just exists to torment old people.

I’m no spring chicken either, I often struggle with ‘hi tech’

After scrolling down the posts, it occurs to me that this particular
’edit’ may only be an option to 'moderators’

So, apologies for
sending you on a 'wild goose chase’

No, you got it right Beryl. After you click reply on the bottom there is a pen to edit and a garbage can to delete. 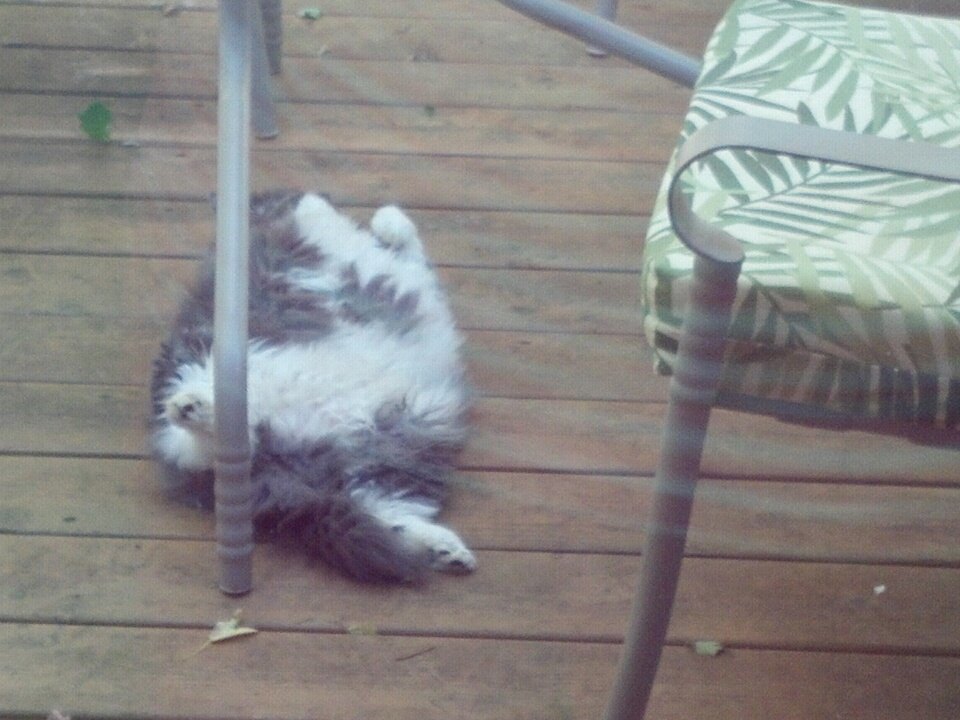 Sorry I still don’t see an edit pen. But I included a picture. That’s something. That’s my cat Chowder when it was 90 degrees outside. She could have come in if she wanted.

LOL, Oreberry: Chowder looks like one cool cat there! Nice upload, too.

Re the edit pen: if you can’t see it, try clicking on the three dots just to the left of “Reply”. Click on it, make your corrections, and don’t forget to click on the button at the bottom left to save it.

Oops, that shot’s too big, but I hope it helps.

There’s no doubt about it, this platform takes some getting used to. But once you catch onto it and its quirks, it works pretty well.

Just shout if there’s anything else we can help you with. Someone here will give you a hand.

Hi Seenie. I will definitely try what you suggest. I have noticed headaches lately and technology certainly doesn’t help. But if there’s something I want to say I’m not going to let tech stand in my way! Haha.