Five seriously disabled stroke patients have shown small signs of recovery following the injection of stem cells into their brain.

Prof Keith Muir, of Glasgow University, who is treating them, says he is "surprised" by the mild to moderate improvements in the five patients.

He stresses it is too soon to tell whether the effect is due to the treatment they are receiving.

The results will be presented at the European Stroke Conference in London.

BBC News has had the first exclusive interview with one of the patients involved.

They are taking part in a small clinical trial involving nine patients in their 60s, 70s and 80s at Glasgow's Southern General Hospital to assess the safety of the procedure which involves injecting stem cells into the damaged brain part.

It is one of the first trials in the world to test the use of stem cells in patients.

Results to be presented on Tuesday show that there have been no adverse effects on the patients so far and there have been improvements to more than half participating in the trial.

However, at this stage it is not possible to say whether the improvements are due to the close medical attention the patients are receiving. It is well documented that the feeling of wellbeing resulting from such attention, known as the placebo effect, can have a positive effect on people's health.

But it is thought that stroke patients do not recover after the first six months of their stroke. All the patients involved in the trial had their strokes between six months and five years before they received the treatment.

The recovery of any one of them - let alone five - was not expected, according to Prof Muir, who is in charge of the trial.

"It seems odd that it should all just be chance and a placebo effect," he told BBC News. "We are seeing things that are interesting and somewhat surprising.

"We've seen people who now have the ability to move their fingers where they have had several years of complete paralysis," Prof Muir said.

"We have seen some people that have been able to walk around their house whereas previously they had been dependent on assistance and we have had improvements that have enabled people to recognise what is happening around them."

These improvements have made it easier for the patients to do day-to-day tasks such as dressing themselves, walking and being more independent.

"My expectation had been that we would see very little change and if we did see change it would be a relatively short-lived temporary change. (But) we have seen changes that have been maintained over time," Prof Muir said.

Among the patients to have shown improvements is 80-year-old Frank Marsh, who had a stroke five years ago. 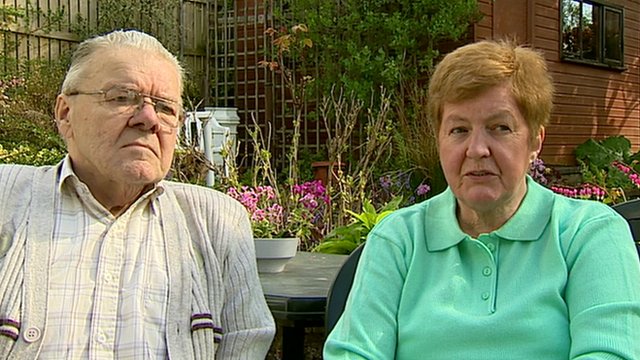 Prior to his attack Mr Marsh, a former teacher, was fit and active: a member of the Glasgow Phoenix Choir and a keen piano player. The stroke left him with poor strength and co-ordination in his left hand and poor balance.

He needs a walking stick to help him move around the house and he can no longer play the piano.

After the injection of stem cells into the damaged area of his brain, his balance and mobility improved as did his hand strength. He can now also tie up his shoe laces.

Mr Marsh said he believed the operation had gradually led to improvements.

"I can now grip things that I couldn't grip before, like the hand rails at the swimming baths," he said.

His wife, Clare, also a teacher, said that the small improvements had made him more independent. "He had reached a plateau and wasn't really improving (after his stroke). But following the operation he is able to do things he couldn't do before, such as make coffee, dressing and holding on to things."

Mr Marsh added that he hoped the improvements would continue: "I'd like to get back to my piano. I'd like to walk a bit steadier and further."

However, Mrs Marsh felt that there would be no further progress for her husband, but hoped that others might benefit from the clinical trial that he is participating in.

"The great potential is what it is going to do for the future," she said. "I told Frank at the beginning that this may not help you, but it might help your grandson."

Mrs Marsh is right in that even if it is proved that the stem-cell treatment really works it will be a long time before any treatment might be widely available.

The results so far pave the way for a so-called phase two trial later this year which will be desirable to determine whether any improvement is due to the treatment.

If the phase two trial does show that the stem-cell treatment is the cause of the improvements, it could still take many years before it becomes widely available. Larger phase three trials will be needed to assess who the treatment is most suitable for and at what stage it might be most effective.

Commenting on the research, Dr Clare Walton of the Stroke Association said: "The use of stem cells is a promising technique which could help to reverse some of the disabling effects of stroke. We are very excited about this trial; however, we are currently at the beginning of a very long road and significant further development is needed before stem cell therapy can be regarded as a possible treatment."

The stem cells were created 10 years ago from one sample of nerve tissue taken from a foetus. The company that produces the stem cells, Reneuron, is able to manufacture as many stem cells as it needs from that original sample.

It is because a foetal tissue sample was involved in the development of the treatment that it has its critics.

Among them is anti-abortion campaigner Lord Alton. "The bottom line is surely that the true donor (the foetus) could not possibly have given consent and that, of course, raises significant ethical considerations," he said.

Reneuron says the trial - which it funded - has ethical approval from the medicine's regulator. It added that one tissue sample was used in development 10 years ago and that foetal material has not been used since.

This may be a massive step in the right direction Alan. The southern general is the hospital Cassie attends

I strongly believe, Stem cells is the answer for a lot. But there are way to many disabilities. Ataxia is at the bottom. Because there are so many different numbers. But really were all almost the same. But there has been a lot of good results with Stem cells.

This shows that stem cells can affect movement. I also understand that strokes can happen either side of the brain but can also happen in the cerebellum. Obviously the stem cells would have to affect what is causing the particular sca but it does give the people who are studying ataxia regarding stem cells something to think about