GUNTUR: Guntur Government Hospital Neurology department head and professor Dr NV Sundarachary has detected another extremely rare syndrome called “Dancing eye” syndrome, also called Opsoclonus Myoclonus Syndrome or Kinsbourne disease on July 13.According to Dr Sundarachary, a one-year-old girl named Navya was brought to the hospital whose parents were planning to celebrate the first birthday on July 15. The girl’s parents suddenly noticed shaky eyes, limbs and trunk without any complaints. She used to walk, jump and play but due to sudden changes in her eyes and body, she was taken to pediatricians and got her investigated with CT scan, EEG presuming it to be seizures. But, the reports were normal.

He further said that the doctors prescribed multivitamins and anti-seizure drugs to her, but, it wasn’t helping. When she was brought to the Neurology Department, the child didn’t have fever, was conscious and fretful at the same time. She was found to have jerky multi-dimensional rapid conjugate eye movements. When she was made to stand, she was unsteady and was unable to stand even with support. Her feet were as if she was dancing.

On careful examination, it was detected that she was affected by a rare neurological disorder. It is caused due to the antibody attacking purkinje cells of cerebellum which is called hindbrain, which helps us balance. These antibodies are called Anti Ri antibodies which can be detected in the blood. A thorough search for neuroblastoma by scan is essential.

He said this syndrome was called kinsbourne disease which is extremely rare with an incidence of 1 in 1 crore. Marcel Kinsbourne, an Austrian Neuropsychiatrist described this condition in 1962 for the first time. He stated that although drugs are available to treat this condition, they are ACTH, steroids, immunoglobulins, plasma exchange and rituximab which is an immunosuppressant. CSF examination and MRI brain scan are essential to exclude other mimicking conditions like acute cerebellitis which is an infection of cerebellum. The one-year-old baby girl Navya is currently undergoing treatment in the GGH. 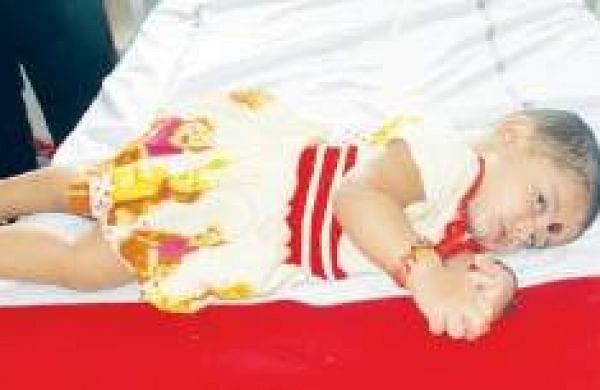