~Is your toothpaste safe?~

Is Your Toothpaste Safe?

You might have assumed that ingredients in products like soap and toothpaste had been thoroughly tested to ensure their safety and effectiveness. Sadly this is not the case. Some ingredients seem to be able to slip through the net of regulation, meaning dangerous chemicals are lurking in products we are using on a daily basis, with serious consequences for our health. 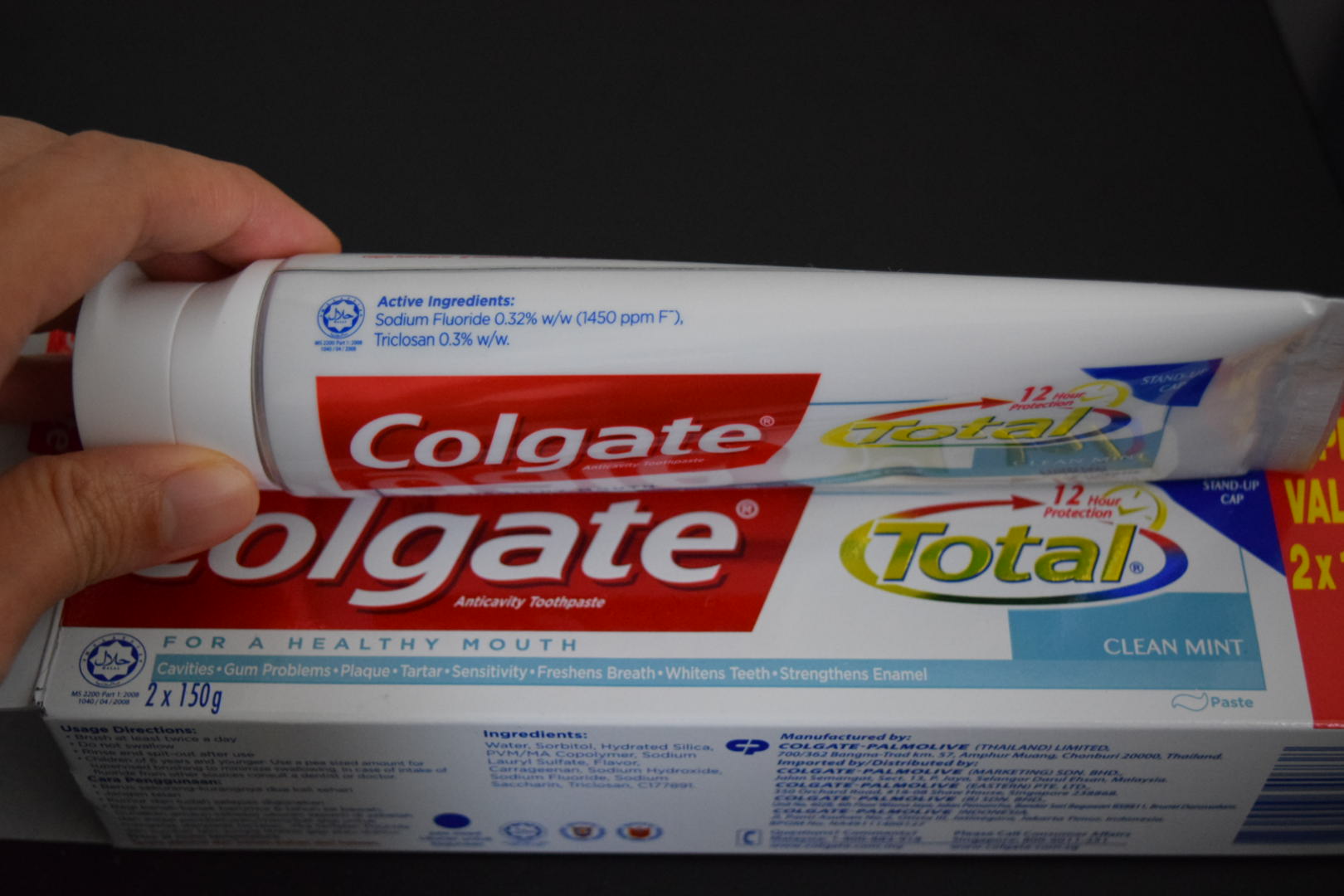 The antibacterial chemical Triclosan was first introduced as a pesticide in 1969. Since then it has found its way into a huge variety of personal and household hygiene products, like toothpaste, and even plastics including children’s toys. Concerns about its safety have been growing in the last decade and it appears there is very limited data to support its safe use or even prove its effectiveness.

Such is the concern about this ingredient that last year the state of Minnesota decided to implement a state wide ban on its use in personal hygiene products. While officially still recognized as safe by the FDA, governors in Minnesota decided that the risk to the public was too great to wait for the FDA to make a long overdue decision about its safety. Even supermarkets in the UK proposed a voluntary withdrawal of the chemical back in 2003 due to increasing concerns about its toxicity. In 2010 the National Resources Defense Council (NRDC) sued the FDA for ‘inaction’ regarding Triclosan and in 2013 the FDA was forced to hand-over data regarding the approval of the Colgate toothpaste Total which contains the chemical.

In 2011 the House Rules Committee requested that the FDA put in place a complete ban of the dangerous chemical based on several significant issues. Triclosan breaks down in the body, especially in the skin when exposed to sunlight, to highly toxic dioxins. These chlorinated dioxins accumulate in the body and are known to cause cancers and disrupt hormones even at very low doses. The House Rules Committee also stated that the over-use of antibacterial agents was promoting widespread bacterial resistance which was cause for great concern. Studies have shown that 75% of the US population has Triclosan or its residues present in samples of blood, urine and even breast milk.

The molecule is relatively stable, it does not readily break-down, and so it easily finds its way into the drinking water supply.During water processing the use of chlorine to sterilize the water intensifies the issue, making the by-products even more toxic by adding more chlorine. The toxic chemicals easily get into the environment and can be found in waterways and natural ecosystems and are responsible for marine pollution worldwide. Despite being designed to kill off microbes the chemical is nearly 1,000 times more effective at killing off algae, crustaceans and fish.

Personal vs hospital use

In addition to the concerns about environmental and human safety there is very little evidence to suggest the chemical is actually effective. Numerous studies have shown that it is no more effective than using soap and water when washing your hands yet it is in almost all soaps and household products labelled ‘antibacterial’. In hospitals Triclosan is used in high doses for patients with skin infections of resistant bacterial strains. At these high doses, around 2%, Triclosan damages the membranes of the bacteria, causing them to break down, thus killing off the infection. However, in the weak doses found in toothpastes and other personal hygiene products the effect is quite different. Low doses of Triclosan disrupt the way bacteria synthesize fatty acids which has a minimal, slower, effect. The same disruptive effect is thought to be responsible for endangering the marine wildlife.

A paper in the Journal of Environmental Science and Health concluded that there are gaps in the data to support the safe use of this chemical. They concluded in 2010 that there was: carcinogenic potential, specifically chronic risk to the skin; high risk of hormonal disruption and likelihood of dioxin formation in the skin (in the presence of sunlight). Concerns about the life-time exposure and accumulation of the product in the body, due to it being in so many products, were also highlighted.

So, considering all the available data, why does the FDA still classify the product as safe for use?

Its advisory information about the chemical states that animal data does indeed suggest that it affects hormonal regulation. It also clearly states that aside from its use in Colgate’s Total toothpaste there are no other known benefits.

A review of available literature conducted by the Cochrane Database of Systematic Reviews found that Triclosan in toothpaste was only “marginally beneficial”.

While Colgate and the American Dental Association maintain that Triclosan is required to prevent gingivitis (infection of the gums) the data is not standing up to the latest round of scrutiny. This month the FDA has been heavily criticized for its role in the 1997 approval of the Total toothpaste.

It would seem the regulators relied heavily on company data to support its safe and effective use and did not perform enough tests themselves. This lack of diligence by the FDA means that for the last 17 years consumers have been putting a substance which is proving to have life threatening toxic effects into their mouths.

The list of known problems associated with Triclosan is worryingly long. It disrupts the function of the thyroid gland, mimicking the hormone thyroxin. It is implicated in breast cancer as it also mimics the hormone estrogen. It impairs heart muscle function (as much as 25% in lab mice) and has been linked to heart disease and heart failure. Since the chemical is able to penetrate the skin, more so through the delicate membranes in the mouth, and accumulates in the body the toxic effects are further enhanced. The cumulative effect of the chemical present in so many products designed to protect our health is alarming to say the least.

Other Ingredients In Your Toothpaste to Look Out For

The health regulatory body in Sweden has already issued guidance suggesting consumers avoid the chemical in toothpaste and hopefully other regulators will come to the same conclusion soon. In the meantime consumers need to be aware of exactly what chemicals they are putting in their body.

This is not the first time ingredients added to toothpaste have come into question. Sodium fluoride has been routinely added to toothpaste for nearly 50 years, while data to question its safety has been collecting for the last 40 years. Despite over 100 peer reviewed animal studies implicating its toxicity, you will still find it in most toothpastes and added to drinking water. It was originally believed that it could help fight cavities by forming a protective coat of fluoridated-enamel on the teeth. However, recent research shows this protective layer is only 6 nm thick (one thousandth of the width of a human hair).

This thin coating is easily lost while chewing and the dental cavities it is designed to prevent could be eliminated by simply cutting back on sugar. Sodium fluoride is a potent toxin which affects the developing brain and studies have shown unequivocally that the amount of fluoride in drinking water is directly linked to lowered IQ. The reduction in IQ is directly correlated with the amount of fluoride consumed and the amount found in the body.

This one is a no-brainer, fluoride is bad for you and specifically your children. The Centre for Disease Control and American Dental Association have both warned their members, but not the public, to avoid using fluoridated tap water when preparing infant formula.

Another toxic ingredient is titanium dioxide. This is a coloring agent, added to toothpaste, vitamins and supplements to brighten the color. Titanium dioxide is a common toothpaste ingredient and it has been linked to autoimmune problems. The very small, nanoparticles, of the ingredient interfere with DNA at a molecular level and cause breaks in the genetic material, chromosomal damage and inflammation. In addition to the autoimmune risk of diseases like arthritis there is also an increased risk of cancer.

Recent studies funded by the National Institute of Health found that this chemical, previously considered safe, is causing a lot of damage to the body. Individuals seem to react with different degrees of severity and workers in contact with substances like this are being warned to limit their exposure through cosmetics and personal hygiene products.

Sodium lauryl sulfate, also called sodium dodecyl sulfate, is an emulsifier and soap; it helps different ingredients blend together and foam-up when used. It is commonly used in toothpaste, cosmetics, industrial cleaning products and much more. This product although regarded as mildly toxic has undergone extensive testing which has proved its relative safety. However, the testing is usually done by directly putting it in the eyes and mouths of lab animals, very little testing has been done on the cumulative effect of low doses.

A typical western consumer uses 9 to 15 personal hygiene products a day which contain Sodium Lauryl Sulfate or a similar chemical, the dose may be low but it accumulates in the body. This accumulation appears to affect the eyes, liver and skin but there is simply insufficient evidence to validate long term safety and new data is cause for concern. There is already limited data to show a link to mouth ulcers and wary consumers may choose to avoid all chemicals which, like this, simply have not been tested sufficiently to prove their long term safety.

Sodium hydroxide is another worrying chemical added to a substance we put in our mouths several times a day for most of our lives. Also used as a drain cleaner it is added to toothpaste to change the pH, mainly needed to balance the effects of all the other chemicals. Have you noticed the warning on toothpaste to spit not swallow? Also the advice to contact a poisons unit if accidentally ingested? This warning is due to the presence of this bleach which is also known for its carcinogenic capacity.