GlaxoSmithKline is backing another venture fund. The London-based drug giant has committed €17.5 million ($23.09 million) for a VC vehicle focused on rare diseases startups in Europe, building on its previous investments in venture firms on both sides of the Atlantic.

Like other pharma groups, GSK has made a point to allocate R&D dollars to the research of rare diseases, which affect no more than one in 2,000 people. The company ($GSK) is now leading development of a therapy against the rare genetic disease Duchenne muscular dystrophy in collaboration with Prosensa, seeking to deliver what could be the first drug for the muscle-wasting disorder. Also, the pharma giant set up a research unit in 2010 that focuses on development of treatments for orphan diseases, which typically command top dollar and present hurdles to generics competition.

Glaxo has a track record of seeding startups in partnership with venture players. In April the company announced a new VC vehicle with Avalon Ventures in San Diego to provide up to $495 million for 10 startups focused on new disease targets. And that deal followed GSK's $50 million investment in Sanderling Ventures' latest fund. Last year the company joined forces with Johnson & Johnson ($JNJ) to back a $200 million life sciences fund from Index Ventures, which has begun to use the money to seed and invest in asset-focused biotech startups.

Almost all major pharma companies have acknowledged that they need to step up to fund innovative startups as other financial powerhouses have stepped back because of the high risk and past failures of such ventures.

- check out Reuters' article - and GSK's infographic on rare diseases

I would like to think that this will take in ataxia as well. It seems to me that hardly a day goes by without some positive news, or is it just that I am still positive in a hellish situation. Thanks again Alan, you really cant have any time for yourself. 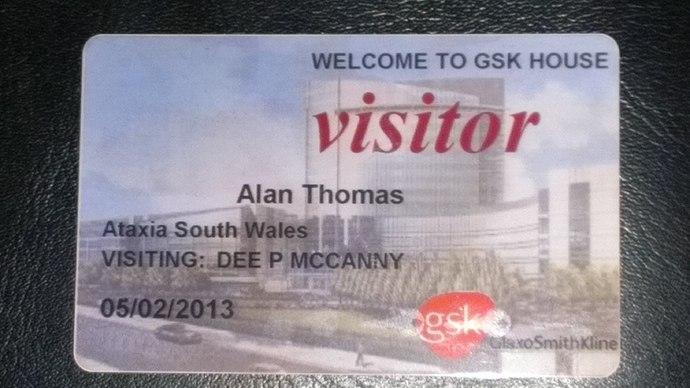 and is a POSITIVE move.

We can be hopefull that Ataxia will be one of those, but research into any raredisease will benefit any amount of rarediseases.

(The identity badge is from the Rare Disease UK agm. GSK hosted, and supplied the excellent venue. Interestingly this was BEFORE this anouncement .................??)