Can`t think of a title, but you have to add one

Is there a Tee shirt or similar available with a brief explanation of the condition, as suffering quite badly from dysarthria, it`s frustrating explaining to multiple people why speech is limited?

This would be a great idea -- for us to come up with our own slogans for ataxia awareness.

Who wants to try?

I heard of one that says, I'm not drunk, I have ataxia.

I’ve just spent the last couple of hours cruising the Internet to see what’s available in relation to this.
There’s the usual ‘Ataxia is not a foreign cab/taxi’ and as Patsy mentioned 'I’m not drunk I have Ataxia’
The current t-shirt from AtaxiaUK says simply ATAXIA, four times.
Wheelchair users seem to have a variety of slogans available but there’s nothing that specifically
hits the nail on the head regarding Ataxia. Maybe the problem stems from too many ‘symptoms’ needing to be covered in as few words as possible?
The average person in the street has no idea what Ataxia is all about, what would make them stop and give it a second thought?

sounds like a good idea. Perhaps with a sense of humour included.

Ataxia, a rare disease is the title. How can we handle it without complaints. Everyone seems to handle it differently. It's frustrating when you can't take medicine to make it go away.

Deaer Bloodaxe, If someone looks like a deer in the headlights because they don't undestand me, I just say, "I have a nejurological disease that causes me to slur my speech. If you don't understand something I say, just ask me to repeat myself please". Yes, it does get quite frustrating! And, for me, it's tiring having to repeat myself, as I have to work so hard to be understood! A tee shirt with the wording Patsy mentioned would be great! Maybe something simply printed (a small card) that we could hand to people would be helpful too...,just a thought!..., ;o)

How about--- get drunk without drinking---- ask me how.

is NOT a foreign Cab !

Great idea ! A Tee-Shirt, a medical card, anything would be helpful.

I'm liking the slogans listed. "I'm not drunk, Officer. I have ataxia." I said this on 3 different occasions after being pulled over while driving. I just couldn't stay 'in the lines'. They didn't believe me.

So, I'm not driving much these days.

How about--- get drunk without drinking---- ask me how.

Not drunk, have Ataxia and proud.

Just a simple idea that can be modified but pretty straight to the point and people don't even have to ask you, they can read it for themselves. 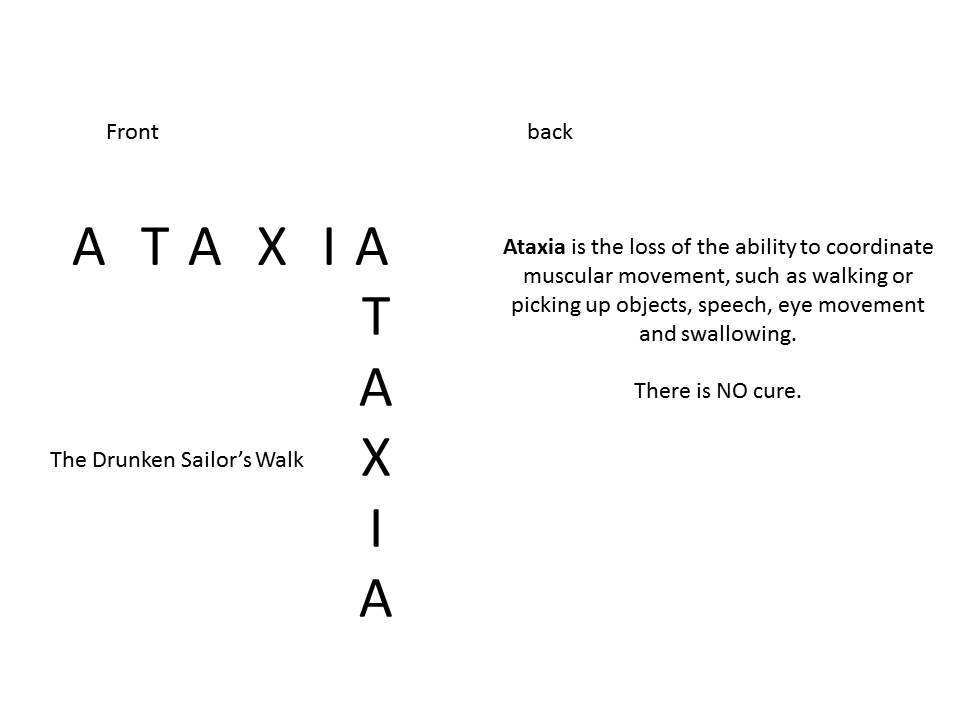 This one is my favorite…"i'd rather be drunk, it wears off

How about this…."I may speak with a slur but i don't think with one!*

Just a simple idea that can be modified but pretty straight to the point and people don't even have to ask you, they can read it for themselves.