Anyone who knows Blake Bowden would describe him as unsurpassed in all these qualities. A local hero in full measure.

Many of his graduating classmates have known him since kindergarten, and fully believe that, hands down, he’s more than earned the hero description.

Meeting a major achievement on May 25, Blake celebrated his 18th birthday, and followed it with another great accomplishment.

On June 2, Blake was ushered across the Athens High School stage by his longtime friend, Susie Runte, to accept his high school diploma, as the 2017 graduating class looked on.

Blake said afterwards, “I felt the warmth and love filling the auditorium as the audience was on their feet, cheering loudly with full hearts.”

Skillfully mastering each new challenge as they appeared daily in his young life, Blake has looked destiny squarely in the face, and met it with absolute determination.

His mother, Robin Power, says, “To be able to cross that stage for his high school diploma was an accomplishment in itself.”

At the age of 6, Blake was diagnosed as having severe heart disease.

Robin explains, “Actuality, the cause of his condition was not diagnosed in its totality. The symptoms were an indication of yet another looming problem.”

Nine months later, he was more accurately diagnosed with Friedreich’s ataxia. It is a recessive inherited disease that causes progressive damage to the nervous system, which can also lead to scoliosis, heart disease and diabetes, but doesn’t affect a person’s cognitive function. It occurs in the general population, roughly one in 50,000.

“There are so few with this disease that its hard to get funding for research to find a curative medicine or treatment for it,” Power said.

Friedreich’s ataxia results from the degeneration of nervous tissue in the spinal cord, particularly the sensory neurons essential for directing muscle movement of the arms and legs.

Blake’s other symptoms were of the typical, including slurred speech, along with the impending curvature of the spine and Hypertrophic cardiomyopathy, which is a thickness of the tissue around the heart that increases in thickness over time, until the heart can no longer continue beating.

Along with the diagnosis, Robin was told there was no cure for the disease, nor treatment and foreseeably. She was told Blake would not live beyond the age of 10.

“This was totally and completely unacceptable,” Power said.

She, along with her family, immediately proceeded straight forward in search of an answer to the problem. In Robin’s online research for help, a support group was discovered, called the Friedrich Ataxia Parent Group.

She soon discovered a supplement approved in other countries, but not in the United States, that had been used with some success.

After five years of it’s use, it was determined that Blake’s heart had decreased in its thickness.

While in his younger years, Blake attended Athens’ Bel Air Elementary School in kindergarten, and in the first grade, then South Athens Elementary for the second and third grades.

During the first grade, he went into an electric wheelchair, because of his heart condition.

“Adapting easily to it was no problem for him. It was up to the students to quickly learn to keep their toes out from under his wheelchair, as he smiled and sped up the hallways,” Power said.

During his years at school, he collected a wonderful community of friends, while his fellow classmates learned important life lessons. They soon realized they could be friends, playful and helpful.

Not at all ostracized as being different, Blake was presenting to them life experiences and opportunities to discover within themselves.

At the age of 8, he became a Goodwill Ambassador for MDA. For years, he was on location for fundraisers to raise money for the Friedreich’s Ataxia Research.

Heroes have their teams, and Blake identifies his as his “Tribe.”

Deborah has known him since he was born, and has always been close at hand. He’s needed each one of these, because for him, everyday has always been an on-going re-adjustment, due to things constantly changing.

For instance, one day he could write, and the next he could no longer write. Fortunately, his mom has always been one step ahead in the game. She already had him learning the keyboard to begin using it as he lost his ability to write.

“Going into the sixth grade became a frightening thought when it would come to all the classes he’d need to physically manage to get to his varied classes,” his mother recalls. “Homebound teachers were brought in for his necessary classwork for the next few years. Each of these became enjoyable relationships for the teacher and the student. Lanier Perkins was with him in his junior high years, then Maggie Jones for the ninth, tenth and eleventh grades, and Debra Quigg for his senior year.”

Blake and his mom feel he’s always had the most amazing caretakers, or, “tribe” or “family.”

This includes all those attending him in Athens ISD. The school administration staff, nurses, therapist and his doctors all become beloved friends.

Runte, his good friend and physical therapist, walked alongside her hero, as he was presented his high school diploma.

“What an honor to have been alongside Blake, crossing that stage. I had such tears in my eyes, when the auditorium stood and cheered,” she said. “I was afraid I’d run Blake off the stage accidentally. It was such a special moment, and I’m proud to be part of his life. I’ve known Blake forever, since kindergarten, and no matter what challenges he was always overcoming, he showed perseverance at all times, and was always moving forward through it all.”

She added, “We’ve always teased each other. As his physical therapist, he would call me the ‘Fun Killer,’ and I’d call him ‘Blake-Zilla.’ I couldn’t be more proud of him. He’s so intelligent. He took the STAAR test, even though he was homebound, and in classes only three days a week, verbally answering all the math. Nothing will stop Blake, and he’s more determined than any other kid his age.”

She continued, saying, “He’s my love, and he’ll always be mine. We plan on being friends forever. I will always treasure our time together. To cross that stage with him was an honor and privilege to give back to him. He’s always given so much to others, and he doesn’t even know it.”

Cearstyn Abba-Gale McGhee, who’s a close family friend, attended the Junior Prom with Blake, and said, “Blake’s one of my best friends, one of the best guys in the world with the kindest soul.”

All the while, Blake has managed to keep his friendships, no matter how far away.

“My bestie since the first grade is Ty Wolf who lives in West Texas now,” Blake said. “My favorite subject in school has been Science and Biology, but I’m glad it’s all done. For fun, I’ve always enjoyed video games, and I especially love the game, Zelda.”

His passion for electronic games has led him to have already begun developing ideas for his own game production.

What’s next for Blake?

For certain, the necessary computer classes are on his agenda.

Both Blake and his mom are excited, and looking forward to their continued team work.

“Anyone who is dealing with Friedrieich’s ataxia, and wants more information, or for support, can make contact with the FARA support group, or the Friedreich’s Ataxia Research Alliance.com online,” Power said. 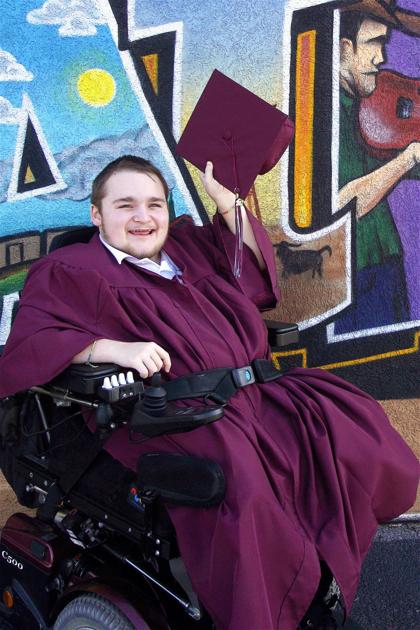 What is your best description of a hero? The dictionary states that a hero is a person who is admired or idealized for courage, outstanding achievements or noble qualities. Some

Wow! That’s a truly amazing story. Thanks for sharing, Alan.