Technology that Uncovered Antibody Has Potential to Identify Other Autoimmune Diseases 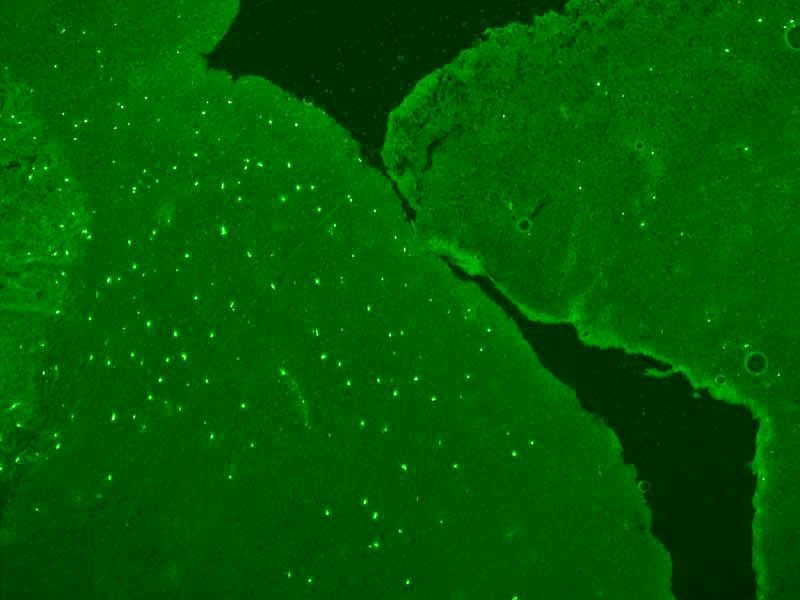 An example of a biospecimen that contains a pattern researchers have dubbed ”sparkling” because of how the samplle looks under a microscope. Over time, researchers noticed that the clinical stories of the patients with these samples were the same: they had ataxia and testicular cancer.

Called “testicular cancer-associated paraneoplastic encephalitis,” the disease causes severe neurological symptoms in men. They progressively lose control of their limbs, eye movements, and, in some cases, speech. The disease begins with a testicular tumor, which appears to cause the immune system to attack the brain. Affected men often find themselves misdiagnosed or undiagnosed and appropriate treatment is delayed.

In a study published in The New England Journal of Medicine , the scientists identified a highly specific and unique biomarker for the disease by using a variation of “programmable phage display” technology. Their refined version of this technology simultaneously screens more than 700,000 autoantibody targets across all human proteins.

Using this powerful tool, the UCSF researchers evaluated cerebrospinal fluid from a 37-year-old man who had a history of testicular cancer and debilitating neurological symptoms, including vertigo, imbalance and slurred speech. The enhanced phage technology identified autoantibodies targeting Kelch-like protein 11 (KLHL11), which is found in the testes and parts of the brain.

These results were correlated and validated with additional patient samples from the Mayo Clinic. In addition to identifying the cause of this mysterious neurological disease, the results point the way to using this protein biomarker as a diagnostic test for men with testicular cancer-associated paraneoplastic encephalitis. 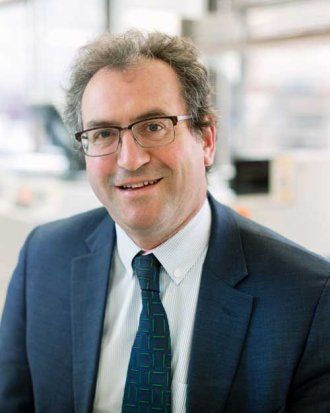 “Mayo Clinic’s Neuroimmunology Laboratory has a long history of biomarker discovery, and this continues that tradition, bringing together Mayo Clinic’s biobank, the largest repository of biospecimens in the world, with advanced technologies being devised and implemented at UCSF and CZ Biohub,” said Sean Pittock, MD, a Mayo Clinic neurologist and corresponding author of the study. “By working together, our organizations have the potential to make biomarker discoveries much more rapidly.”

Pittock is director of Mayo Clinic’s Neuroimmunology Laboratory and the Marilyn A. Park and Moon S. Park, MD, director of the Center for Multiple Sclerosis and Autoimmune Neurology.

From Darkroom to Discovery

About 20 years ago, Mayo scientists first identified a staining pattern that researchers dubbed “sparkles” because, in a darkroom under a microscope, the patient’s sample looked like stars shining dimly in the night sky, Pittock said. The male patient had ataxia – poor coordination, involuntary eye movements, change in speech – and turned out to have testicular cancer.

Over the years, the Mayo lab occasionally identified the sparkles pattern, and the patients’ clinical stories were the same: ataxia and testicular cancer. But the pattern was faint and easy to miss, and an autoantibody target remained elusive.

A UCSF team led by Joe DeRisi, PhD, a biochemist and co-president of Chan Zuckerberg Biohub, and Michael Wilson, MD, neurologist and member of the UCSF Weill Institute for Neurosciences, developed a customized version of phage technology that identified KLHL11 as the target for testicular cancer-associated paraneoplastic encephalitis based on a patient’s sample. The enhanced phage technology builds on work pioneered in the laboratory of Stephen Elledge, PhD, at Harvard Medical School.

The collaborative effort reported in the new paper was spearheaded by co-first authors Caleigh Mandel-Brehm, PhD, a UCSF postdoctoral researcher, and Divyanshu Dubey, MBBS, a Mayo Clinic neurologist and lab medicine physician. Analyses were conducted on biospecimens of 12 additional men with similar medical histories. All were positive for autoantibodies targeting KLHL11. 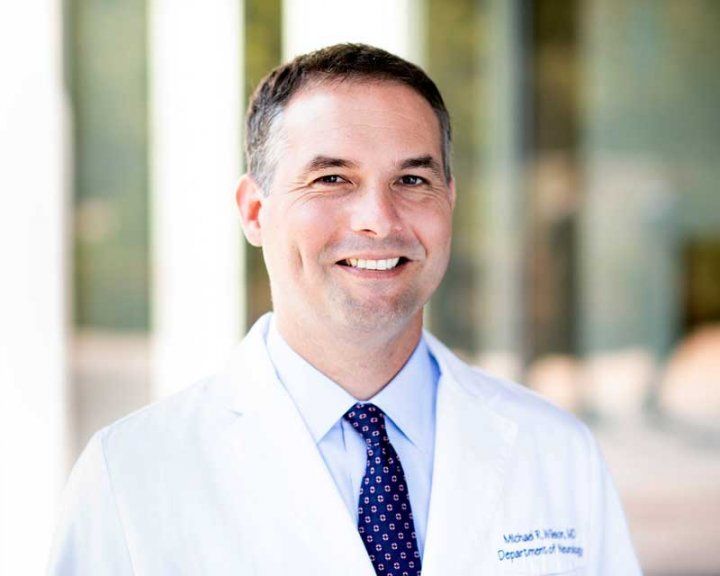 Using this biomarker signature, 37 patients now have been diagnosed with this paraneoplastic disease, and the scientists believe many more will be diagnosed.

“This study is the tip of the iceberg,” DeRisi said. “We know there are more paraneoplastic autoimmune diseases waiting to be discovered and more people to help.”

“For roughly half the patients with paraneoplastic or autoimmune causes of encephalitis, the protein being targeted has yet to be identified,” Wilson said. “Building on the Elledge lab’s work, we hope to tackle that problem head-on with this technology for finding antibodies, so we can potentially add to the number of diseases that are known, and help patients and families get diagnoses more quickly.”

Physicians who suspect a patient may have this form of paraneoplastic encephalitis currently can work with Mayo Clinic to screen for KLHL11. “Early diagnosis is extremely important,” Dubey said. “If we diagnose patients early, we can start them on immunosuppressive medications. The sooner we can prevent this damage from happening, the sooner we can stop the disease progression and the better chance we have for clinical improvement in the patient’s life.”

In an epidemiological assessment included in the study, the prevalence of KLHL11 encephalitis in Olmsted County, Minn., home to Mayo Clinic’s Rochester campus, was nearly 3 per 100,000 men. Thus, KLHL11 is one of the more common autoimmune encephalitis biomarkers found in Olmsted County, and likely elsewhere in the U.S. and beyond.

The study was supported by the Rochester Epidemiology Project, which is funded by the National Institute on Aging; Chan Zuckerberg Biohub; Rachleff Foundation; UCSF’s Marcus Program in Precision Medicine Innovation and Center for Next-Gen Precision Diagnostics, with funding from the Sandler Foundation and the William K. Bowes Jr. Foundation; a Mentore

Any Health related info can be scary, remember it is info, not directed at you personally.

I think, most ataxias are not “auto immune”.

I couldn’t find any info confirming either way. But it seems auto immune related Ataxias come on more quickly.

ROCHESTER, Minn. — While autoimmune cerebellar ataxia(a loss of muscle control coordination) can lead to severe disability with some patients becoming wheelchair-bound, there are factors that may help predict better immunotherapy response, according to the Mayo Clinic study published by JAMA Neurology.

“Historically, we found cerebellar ataxia to be a hopeless disease,” says Andrew McKeon, M.B., B.Ch., M.D., a neurologist on Mayo Clinic’s Rochester campus and lead author of the study. “Although usually severe, treatment responses can be gratifying, particularly in patients with nonparaneoplastic disorders.”

Journalists: Sound bites with Dr. McKeon are available in the downloads.

The team of researcher reviewed Mayo Clinic medical records to examine treatment responses and outcomes in 118 adults with autoimmune cerebellar ataxia who:

Nearly three-quarters of the patients were women, and the median duration from symptom onset to last follow-up was 25 months. Among the patients, 63 had paraneoplastic ataxic disorders, and 55 patients had nonparaneoplastic ataxic disorders. Overall, 51 patients had physician-reported neurologic improvement with immunotherapy while they benefited from cancer therapy, according to the study results. Analyses suggest factors that may predict better immunotherapy response and neurologic outcomes include a nonparaneoplastic disorder, the detection of at least one or more PMP antibodies or the detection of GAD 65 (glutamic acid decarboxylase 65-kDa isoform) antibodies.

"The autoimmune component is important because it indicates that, potentially, the patient has a treatable disease, but also may indicate an underlying cancer that needs to be looked for,” adds Dr. McKeon. Regardless of the response to immunotherapy, 56 patients used a wheelchair, 26 patients had walkers and seven patients used canes to get around. The study reports that among the remaining 29 patients, 25 required no gait aid, but had an abnormal gait, and four patients had normal gait.

Ataxia can be hereditary or acquired. Auto immune diseases are when your own body makes antibody to your own tissues ( e.g. Celiac Disease, Hashimotos Thyroiditis or valvular diseases in Rheumatic fever). Most of ataxia patients don’t fall in the “auto immune” category. There are literature to suggest “antibodies” can be formed against the cerebellum in response to external agents like “Gluten”. When antibodies attack your own cerebellum and it causes shrinkage of the cerebellum, it can result in ataxia. But genetic ataxia is caused by increased “Glutamate” production in the nerve endings. That’s why Biohaven is working so hard to modulate Glutamate. The acquired form of ataxia can be from many reasons and ONLY one of them is auto immune. I wish most of the ataxias were auto immune, then the treatment can be directed to the immune response( where there are many, including steroids and immuno globulins). There are many drugs available in the market to carve your immune response, such as “Humira”.and like. The only real cure for genetic ataxia is “genetic editing” and any trial to modulate glutamate is for symptomatic relief.